Top Marques Monaco 2019 was the 16th edition of a show of exclusive and luxury items, including super cars, hyper cars, and classic cars, taking place in Monaco.

In 2019 this event – billed by the New York Times as the world’s most exclusive super car show – was scheduled to be held just after the Formula 1 Monaco Grand Prix. The decision to move the supercar show from its original dates of April 11th to 14th 2019 was made after a growing number of manufacturers expressed a desire to attend both Top Marques Monaco and the Monaco Grand Prix, from May 23rd to 26th 2019, in a professional capacity. So the show in 2019 took place from May 30th to June 3rd, 2019.

An extraordinary collection of the most exclusive and rarest super cars and hyper cars in the world will be on display – and for sale – in Monaco in May 2019 at the annual Top Marques Monaco automobile show.

Exhibitors at the 2019 Edition of Top Marques Monaco – under the high patronage of H.S.H. Prince Albert II of Monaco – were iconic brands like Aston Martin, Bentley, Bugatti, Ferrari, Lamborghini, McLaren and Porsche, among others. One focus of the 2019 edition is to be a “green” show – with a number of electric vehicles including the latest models from Tesla, the Audi e-tron and the Puritalia Berlinetta.

An overview of some supercars on display at the 2019 show:

Bugatti Chiron Sport is one of the most expensive supercars in the world – at 3 million euros.

Azaris by Ferox is a six-wheel vehicle ready to roll on Mars.

McLaren presented in an avant-premiere its Grand Tourer McLaren GT.

Militem from Italy was present as well.

Puritalia from Napoli, Italy, showed its Berlinetta, a hybrid coupe with 965 hp.

Zacaria, the first street-legal F1 car with 700 hp, was present.

Top Marques Monaco is not just a super car show, but a super boat show as well. Top Marques has traditionally showcased a handpicked selection of most exclusive super boats and tenders each year.

Eelex is a luxury, pure electric super craft by the Swedish company X Shore. It will be present on the Esplanade outside Monaco’s Grimaldi Forum during the show.

The Eelex – it promises no more noise and fumes and offers a sailing experience without the wind – is capable of speeds of up to 40 knots and a range of 100 nautical miles.

Saint-Tropez boatbuilders King-Boat will present the Bagheera 50 GTS 3500 HP in a world premiere.

King-Boat says that the Bagheera 50 GTS 3500 HP will cross the Mediterranean from Monaco to Calvi in less than one hour!

Fjord 38 Xpress by BC Yachting Monaco

The Fjord 38 Xpress will be available for about 300,000€. It will be presented by BC Yachting Monaco during the show.

This luxury tender or day-cruiser has an avant-garde design. Performance is up to 43 knots with 700 hp. The boat has an equipped galley, a double berth, and a bathroom.

Inside the Grimaldi Forum German tuning manufacturer will be present with its BRABUS G Class Mercedes, outside the Forum with the BRABUS Shadow 800 by Axopar.

The powerful craft is fitted with bespoke BRABUS finishings such as an opening sunroof, high-end Garmin electronics and a pair of Mercury Racing 400R Verado outboards with a joystick. The price is about 440,000€.

An exciting novelty for this new edition of Top Marques Monaco 2019 is an additional private viewing day, being held on Monday June 3rd, in the Grimaldi Forum. This private viewing day is by ‘invitation-only’. No tickets will be sold for this event. It will take place on Monday from 10am to 7pm.

Top Marques has renewed the partnership with Cars & Coffee Monaco for the 16th Edition of the show. Cars & Coffee Monaco takes place on Sunday, June 2nd 2019, from 10:00 am to 1:00 pm at the Opéra de Monte-Carlo, followed by a lunch at the Café de Paris. Menu made of starter, main, water, coffee and parking is 70€.

For the 15th edition of Top Marques Monaco, more than 40,000 visitors came to the Principality in April 2018. In unusually warm weather they could admire a superb compilation of super cars and rare classic cars.

In the Ravel super car Hall in the Grimaldi Forum there were six vehicle world premieres. Many vehicles were sold, including a world premiere, which was picked up within a few hours.

Thanks to a long-standing partnership with the Casino de Monte-Carlo and the Societe des Bains de Mer, Top Marques was also represented on Casino Square. Here in 2018 the Apollo IE super sports car was on display, which checked in on its official tour to Monaco. This super car was estimated at a value of 2.3 million euros.

View our pictures taken at the Top Marques Monaco 2018:

no images were found

Numerous other luxury vehicles crossed the streets of Monaco during this four-day show.

In front of the doors of the Grimaldi Forum, live test drives with more than 25 vehicles again were possible for potential buyers and VIP visitors on sections of Monaco’s famous Formula 1 course.

The show included a large variety of other luxury products as well, such as unique watches and tailor-made jewelry.

And more than 5,000 glasses of bubbles were served in the VIP lounge.

See our photos from the Top Marques Monaco 2017:

See our photos from the Top Marques Monaco 2016: 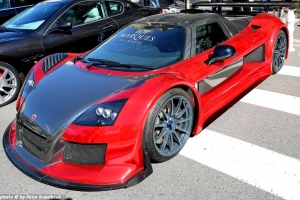 Tickets for Top Marques Monaco are available on the website www.topmarquesmonaco.com or on the Fnac website www.fnacspectacles.com. Tickets cost 70 euro for Thursday May 30th and Friday May 31st and 40 euro on Saturday June 1st and Sunday June 2nd. A VIP ticket offering access to a VIP Lounge and Private Terrace is also available throughout the four-day event for 120 euro per day.

For more information on the show and confirmed exhibitors, please consult the website www.topmarquesmonaco.com